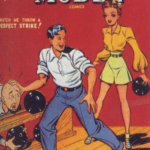 Possibly spurred on by the success of Patsy Walker and others, several “career girl” comics were launched by Timely (Marvel) Comics in 1945, with many first issues happening in August 1945. While Tessie the Typist, Nellie the Nurse, and Dolly Dill did not fare very well – Millie the Model became a big enough hit […]