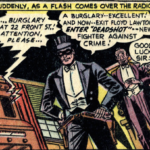 In Batman #59 (April 1950), the criminal Deadshot makes his debut. In 1950, he is bored millionaire Floyd Lawton who uses his expert marksman skills as a crime fighter to win over Commissioner Gordon. Over the course of the story, it is revealed that Deadshot really wants to become Gotham City’s newest crime lord. Batman […] 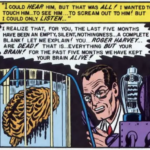 Just a couple months after debuting its new lineup of anthology comic books, EC introduces Weird Fantasy #1 (March 1950) to keep Weird Science in weird company. I loved the stories in this book! One involved keeping a human brain alive, another involved time travel, and yet another featured inter-planetary space travel with a twist […] 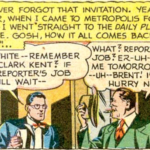 Speaking of world-building, in Action Comics #144 (March 1950), we are flashed back to the time when Clark Kent first tried to get hired by Perry White at the Daily Planet. Years after Perry White visited Smallville High School and suggested it, Clark moves to Metropolis and tries to take Perry up on this offer […] 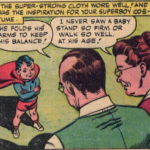 In Superboy #8 (March 1950), we get a little more world-building in a story that depicts the first appearance of Super-Baby / Super-Toddler and shows where Superboy’s super-suit was inspired from. Ma Kent sews blankets from the Kryptonian rocket into play clothes and gives him a cape. Another story in the issue has Superboy tricked […] 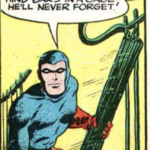 Despite the clear indication that the comic book industry has moved on to western, horror, and romance books, Fox tries to resurrect the Blue Beetle in Blue Beetle #58 (February 1950). The book picks up where the original left off two years back in 1948, with Dan Garrett returning to the police force and to […] 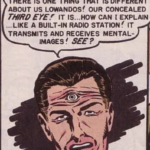 Rounding out EC’s new line of horror comics is Weird Science, an anthological science fiction comic taking over the numbering from “Saddle Romances”. The stories are very reminiscent of The Twilight Zone TV series (1959), including an alien that has a third eye :-). 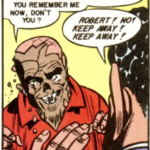 In January 1950, EC renamed its “War Against Crime” comic to “Vault of Horror” with issue #12. In it, we get even more gruesome tales of horror than in last month’s Crypt of Terror comic, including an evil character using acid to first disfigure someone and then attempt to dissolve their entire body! The Vault […] 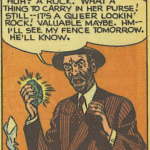 We have finally come to the third decade of comics, the 1950s! In Action Comics #142 (January 1950), a catpurse lifts a piece of synthetic kryptonite from Lois Lane’s purse. The kryptonite had been synthesized by Luthor in the previous issue (Action Comics #141), and the rock had gone missing at the end of that […] 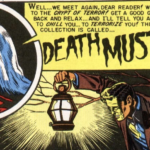 Well, the era of EC horror comics finally begins in December 1949 with The Crypt of Terror #17. Prior to this issue, the comic was named “Crime Patrol” and before that it was International Comics. Remember? The Crypt-Keeper introduces the first story, but his debut appearance was actually two issues prior in Crime Patrol #15, […] 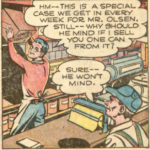 In Superboy #6 (November 1949) it is established for the first time that Pa Kent owns and runs a general store in Smallville, further fleshing out Superboy’s back-story. Jonathan Kent twists his ankle and Clark has to take a week off school to run the store. Superboy foils a criminal plan at the same time.