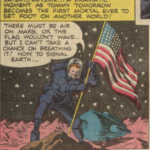 In Real Fact Comics #6 (November 1946), the character of Tommy Tomorrow is introduced, stretching the bounds of what I might call “fact”. In “Columbus of Space”, Tommy is the highest scoring graduate of Rocket College, class of 1954. He is chosen for Operation Mars and becomes the first mortal ever to set foot on […] 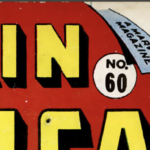 In October 1946, the covers of all of Timely Comics now feature “A Marvel Magazine” in the corner. Timely seems to have given the reigns to Stan Lee who is credited as “Editorial and Art Director”. The stories in Captain America #60 feel a bit like Marvel in its early Silver Age with lots of […] 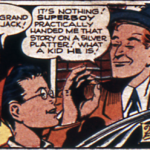 In Adventure Comics #111 (October 1946), we see the second appearance of Jack Smart, reporter for the Daily Planet and Superboy’s Pal. Beyond experimenting with the supporting cast, Superboy is also aging. He was definitively ten years old at the beginning of 1946 and now appears to be almost an adolescent – maybe twelve years […] 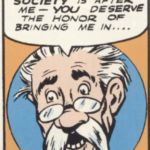 All-Star Comics #32 (October 1946), features the second appearance of the Golden Age Psycho-Pirate, Charles Halstead who tries to defeat the Justice Society of America by giving them different challenges, each related to an emotion. 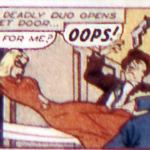 Timely (Marvel) Comics introduces a new female hero in The Blonde Phantom in All-Select Comics #11 (September 1946). As the Golden Age of Comic Books is winds down, we will start to see fewer and fewer superhero debuts, so this is nice! The Blonde Phantom was Louise Grant, the mousy secretary of Mark Mason, a […] 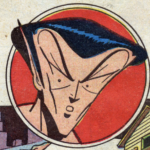 Speaking of changing head shapes, I’ve mentioned Namor the Sub-Mariner’s outrageous head shape before, but I feel like Sub-Mariner #21 (September 1946) is peak Namor head dysmorphia. I mean it’s just outrageous and alien: What’s even more interesting is that “Sub-Mariner vs. Green-Out”, the third Sub-Mariner story in the same issue just pages away is […] 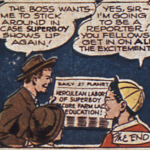 The writers of Superboy started to realize what their stories are missing: A supporting cast! In Adventure Comics #110 (September 1946), we see the first attempt at that: Jack Smart, reporter from the Daily Planet comes to the as-yet-unnamed small town where Clark lives as a boy to find out about Superboy. This directly contradicts […]

As previously mentioned, 1946 is a year in which Superman’s appearance gradually evolved into its post-Shuster shape, thanks to Wayne Boring’s work on covers. In Action Comics #102 (September 1946), we see not only his pupils, but the proportion of his head to his body has now changed and his facial expression is varying and […] 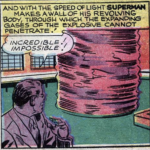 In Superman #43 (September 1946), Superman faces off against Luthor again. This time Luthor has invented a super-hard material he calls Luthorite. The story lets writers enumerate new powers and abilities, as well as a weakness. He may have photographic memory, but it is revealed that Superman cannot see through lead with his x-ray vision […] 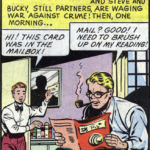 Timely (Marvel) Comics tries to flesh out Captain America’s back story in Captain America #59 (August 1946), with a re-telling of his origin, an updating that Steve and Bucky have been recently honorably discharged from the Army, and then Steve choosing to go back to his role as a school teacher. I blame Stan Lee, […]