March 1949 ends another Timely (Marvel) superhero solo book with Captain America #73 (March 1949). With its next issue, it becomes “Captain America’s Weird Tales”, a horror comic, which maybe was fore-shadowed by the truly macabre ads for toys in this issue. Pictured above is Rita, a babygirl doll with long vivacious red hair that […] 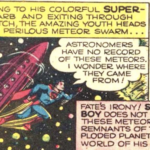 In Adventure Comics #140 (March 1949), Superboy takes a trip to the moon with an absent-minded professor. Mind you, this would have been in the 1920s or 1930s, but by this time DC was kind of ignoring the time difference between Superboy and Superman, basically treating them as individual characters to a degree. Anyway, a […] 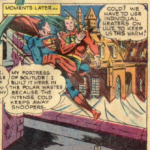 Although Superman had built his “sanctuary” back in 1942, it was more or less a one-off story that was never explored. Superman #58 (March 1949) firmly establishes that Superman has a “fortress of solitude” and it is in the “polar wastes”. Interestingly it looks a lot like an artist’s depiction of an older European town. […] 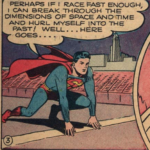 Another story from Superboy #2 (March 1949) establishes the first time that Superboy willingly travels through time. After discovering a familiar red cape inside a 150-year drum in a museum, Clark steals it, drags it through a volcano and a vat of acid before declaring it his cape. He then breaks through the time barrier […]

In Superboy #2 (March 1949), it is finally established, for the first time, that the young Clark Kent lives in a town named Smallville. As recently discussed, amidst many other superhero books getting cancelled and characters disappearing into the Golden Age, Superboy is the only superhero to get his own book. I think this is […] 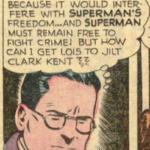 In Superman #58 (March 1949), the writers of the Superman comic visit, for the first time, a story in which Lois Lane actively tries to break her Super-Crush on Superman. On the advice of a doctor, Lois Lane tries to break her obsession by transferring her love to Clark Kent, which apparently seems to work […] 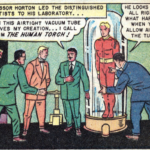 In Marvel Mystery #92 (February 1949), the Human Torch‘s origin story is re-told, with a framing story of his creator, Professor Horton, passing away. This is also the last appearance for years of the original Human Torch. After this issue, Marvel Mystery Comics is renamed to Marvel Tales and becomes a horror / supernatural anthology […]

In February 1949, Timely (Marvel) debuts Amazing Mysteries comics with issue #32, an odd first issue number. It seems like it picks up numbering from Sub-Mariner, except Sub-Mariner Comics has its final issue (#32) next month. Anyway, in Amazing Mysteries, an anthology of creepy tales, one story features a narrator character named “The Witness” that […] 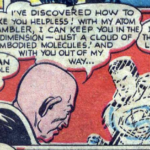 Luthor manages to create a teleporting device in Action Comics #131 (February 1949). While committing crimes with them, he manages to accidentally teleport Superman, and then decides to trap him in “the 4th dimension”. While Superman is trapped there, he is invisible to everyone but can still move and see things that are going on […] 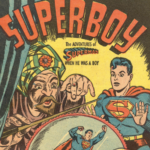 In the midst of major superhero books being cancelled, it is surprising to see a superhero character get a new book all their own, but Superboy #1 debuts in January 1949. Superboy also had his own distinctive font/logo that I associate heavily with the Silver Age. The first time this logo was used was actually […]