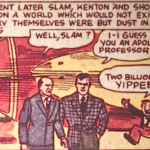 The normally grounded Slam Bradley and Shorty encounter a scientist who has invented a time machine, joining Bobby and Binks as time travelers. They meet bird and flower men in 2 Billion A.D. I must have missed the story where Slam water skiied over a shark… 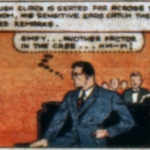 In December 1938, Action Comics #8 featured the first time Superman used his super hearing power, setting the stage for what was to be a gradual widening of Superman’s powers to god-like abilities. Action Comics #8 also featured Superman deciding that the right way to set a bunch of wayward kids straight was to demolish […] 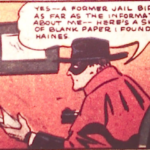 The Crimson Avenger was the first masked hero in the DC Universe to be a fugitive from the law, operating outside of it: A vigilante. November 1938 was special for DC because for the first time it featured two of its costumed adventures on comic book covers (Superman on Action and Crimson Avenger on Adventure […] 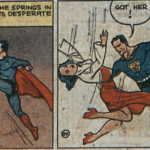 By October 1938, Superman’s fame is beginning to spread both in the real world and in the fictional world of the DC universe. The Daily Star dubs him the “Man of Steel”. It leads to a fun story where a promoter claims he is Superman’s manager and uses a fake Superman to garner promotional revenue. […]

September 1938 also saw the debut of The Crimson Avenger in Detective Comics #20 by Jim Chambers. Basically the Crimson Avenger was a knock-off of The Green Hornet, having a mask, a gas gun and an Asian sidekick named Wing – but he is DC’s first masked hero, so I guess he deserves a mention. 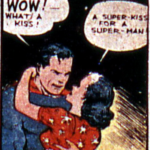 Lois kisses Superman for the first time in Action Comics #5 (September 1938) and their relationship shows some continuity as this is clearly their second meeting. With this story, Jerry Siegel beautifully sets up a trope that would power Superman’s supporting cast for 50 years: Lois is in love with Superman and can barely give […] 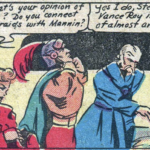 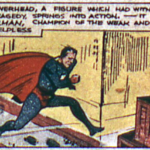 Action Comics #4 (August 1938) brought the most unusual Superman story thus far. It seems clear that Jerry Siegel and Joe Shuster were still experimenting with this character at this time. In it, Superman tries to capture a hit & run drunk driver, but in the process the driver has a heart attack as his […] 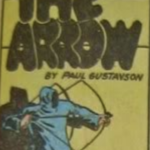 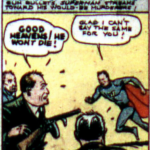 Superman‘s powers grew over the years, but being bulletproof was one of the few that were there from the beginning (the other two being increased strength and speed). Above is a panel from Action Comics #2 (June 1938).