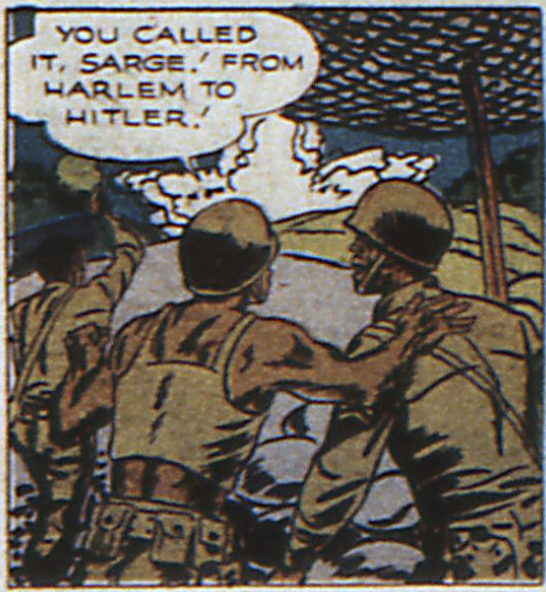 The war was still going strong in January 1945 when “Johnny Everyman” stories began to show up in DC’s World’s Finest Comics. In Worlds’ Finest #17, the installment describes the story of Ralph, an African American soldier and a friend of Johnny Everyman, as he returns to the United States a decorated war hero.

Johnny Everyman (a white man) notices his friend being discriminated against at a restaurant and invites him and his friend to sit at his own table. Ralph’s bitterness and hopelessness at the injustice shows through:

Johnny Everyman then reminds Ralph that there are many examples of the government trying to end racism, there are many African American role models alive today, and generally tries to tell Ralph to “keep your chin up”. We’ll just never mind that Paul Robeson was blacklisted during one of America’s own major bouts with fascism, shall we?

Pearl S. Buck was the creator of the Johnny Everyman strips and this story is a great example of a a comic book company trying to take public service announcements seriously. It is the first time I’ve seen a story try to shed light on a serious social issue.