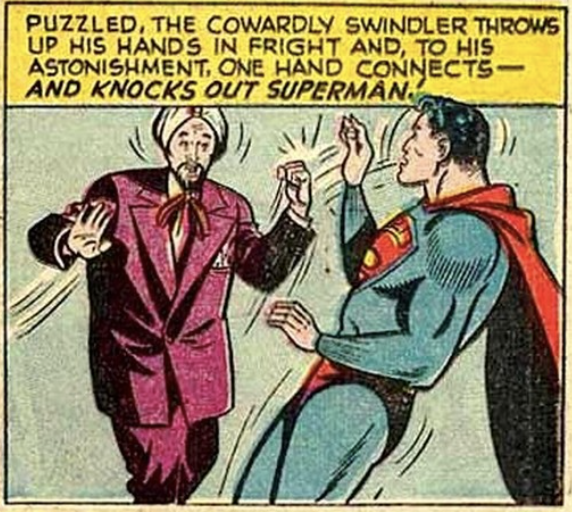 In September 1949, Superman #61 hit the stands – the most important book so far in the evolution of the Superman myth. In it, Superman encounters a fake “swami” who happens to have a piece of kryptonite in his turban.

Lois Lane helps him out of this first encounter. The swami, believing he has hex powers, recruits some criminals who proceed to gleefully beat the snot out of Superman at their next encounter.

Tired of ending up dumped on his ass, Superman finally goes off to investigate the power of this swami. He learns the man bought a rock off a certain prospector and the prospector reveals that they are, in fact, meteorites.

Superman then decides (somehow) to trace the meteorites back to their origin in space, streaking off at the speed of light and traveling back in time. He lands on the planet Krypton as a ‘ghost’ and can observe the scientifically advanced society. He witnesses a scientist named Jor-el who sends his child off the doomed planet. Superman follows this rocket back to Earth where he learns that the child is himself!

Superman decides to dump the pieces of kryptonite into the ocean. The story changes Superman in two fundamental ways forever: He is now no longer invulnerable, and he now understands why he has powers and that he is an alien. Both concepts would be greatly expanded upon throughout the coming decades.

Another story in this issue expands on Lois Lane, giving her a roommate and a home life that we have never seen before: Shopping for groceries, cooking a dinner, going on a double date with Clark Kent and her roommate. It presages Lois Lane getting her own comic book years later.

Like the debut of Superboy comic, I consider Superman #61 another major step in the evolution towards the Silver Age of comic books, an Early Silver Age. Characters are expanded upon in a (semi) realistic way and continuity is fundamentally changed for characters.