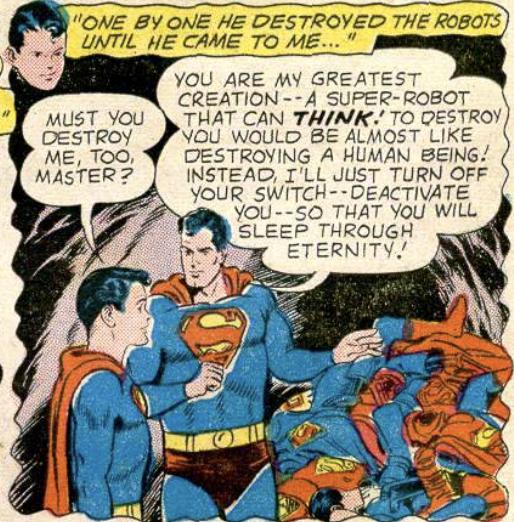 In Jimmy Olsen #37 (April 1959), “Superman’s Super Rival” has Jimmy meeting a new boy-sized “hero” covered in lead-lined bandages and sporting superpowers like Superman. Superman is curious as to the identity of the new hero, who calls himself Mysterio, who appears to be trying to steal Jimmy’s loyalty away from Superman.

It turns out to be a sentient robot that Superboy had created back in the day. When Superman had grown up, he decided to destroy all his Superboy robots, but spared this one (it seems like Superman gained some philosophical perspective since Rebello) by just shutting it off and burying it forever in a scrap pile. Unfortunately a mole burrowed into the cave and accidentally activated the robot – I shit you not.

All’s well that ends well, since Superman decides to just convert Mysterio into his fifth Superman-Robot.