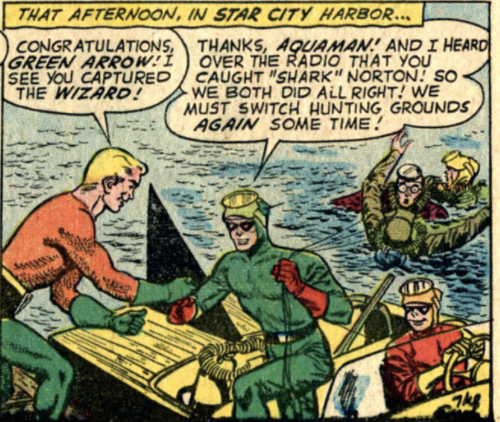 I’m sure I’ll stop posting every time new characters meet or team-up, but it’s still interesting to me at this point when it happens in the DC continuity (see Green Arrow meeting Superman). This month, in Adventure Comics #267 (Oct 1959), we get a bit of a unique twist when forgettable Aquaman and Green Arrow villains escape from jail and agree to swap environs to escape their nemesis. In Aquaman’s story, he has to go after “the Shark” on land by fashioning a helmet full of water. Next, in Green Arrow’s story, he and Speedy go after “the Wizard” underwater. Both heroes triumph in the end, though Green Arrow has to use his “telepathic power” to enlist Topo:

“I recognize Topo, Aquaman’s octopus pal! I met him once years ago! If I concentrate on Topo with all my telepathic power, maybe he’ll translate my appeal to the other fish!”

Green Arrow in “The Underwater Archers”

And yes, I know that the Legion of Super-Heroes show up for their second story with Superboy in this issue of Adventure Comics, but I really didn’t like the story because it was another look-at-how-bad-everybody-is-treating-Superboy type story with another outlandish explanation.