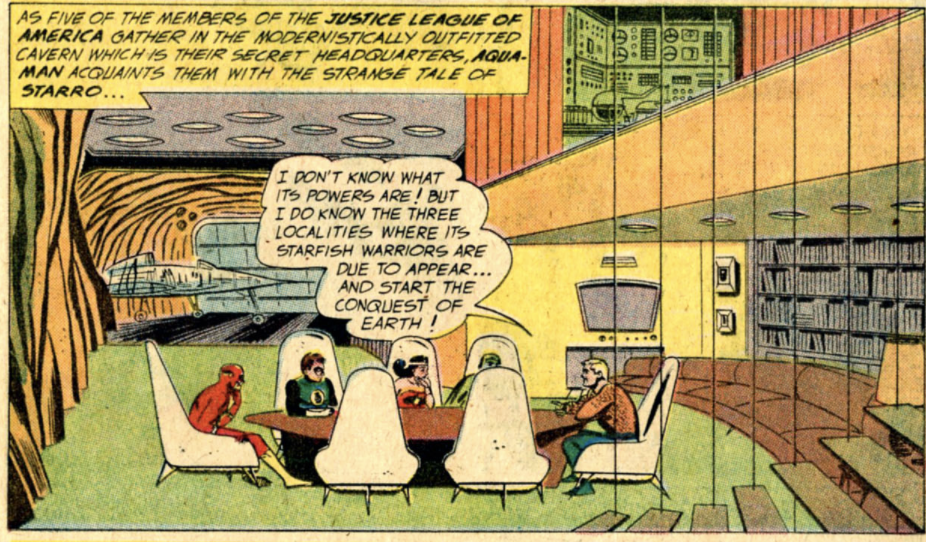 Well here we are, at the last post from the 1950s, and it’s a milestone event for DC: The introduction of the Justice League of America in The Brave and the Bold #28 (Dec 1959). Written by Gardner Fox, who also created and wrote the Golden Age Justice Society of America, this new team features the Silver Age characters of Superman, Batman, Wonder Woman, Aquaman, Flash, Green Lantern and the Martian Manhunter.

This first adventure is a little bit of a cheat, since Superman and Batman do not respond to the emergency summons that Aquaman sends out about a giant starfish that has announced it is going to try and conquer Earth with 3 starfish minions. The other five members briefly meet in their headquarters, and Flash (acting as chairman), sends GL out to take on one starfish, Wonder Woman and Martian Manhunter to take on the other, while Flash tackles the third, leaving Aquaman with not much to do.

Ultimately the heroes vanquish the three starfish minions and Flash meets a beatnik-yapping, finger-snapping teenager named “Snapper” Carr, who is seemingly immune to the starfish’s powers. The five heroes go to tackle the main Starro, which gives us a couple decent action shots of the heroes:

With Starro defeated, the JL members induct “Snapper” as an honorary member of the Justice League. Despite the annoying Snapper dialog, I’m really excited to see DC teaming up all its premiere super-heroes! If I remember correctly, it takes a few issues before they start to figure out how to weave the heroes properly together and to actually use Batman and Superman.

Since this is the end of the 1950s, I guess it’s pretty obvious that I’m excited for the 1960s, since that’s when the Marvel universe begins to take shape and Marvel’s competition with DC brought out good things on both sides. This will be the fourth decade that I cover with this blog!