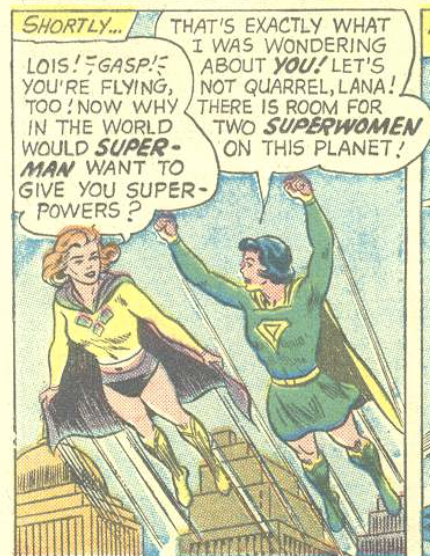 In “Lana Lang, Superwoman!”, the third story in Lois Lane #17 (March 1960), Superman gives Lana an injection of his super-blood temporarily granting her super-powers. At first Lois is jealous, but then Superman does the same for Lois. Lois has been a super-woman many times before, but this is a first for Lana, at least as an adult.

And why did Superman do this? Well, it turns out that Brainiac had made a deal with Superman that he would not destroy Earth on one condition: he gets to lure Lois and Lana to a certain location on a certain day, a time bomb will go off, and Superman must agree that he will be in another galaxy at the time.

Clever Superman for timing everything right! Brainiac stands by his word. Kudos to the writers for bringing back Brainiac! Boo to the writers for not explaining at all what made him come out of his century-long space-slumber from two years ago!