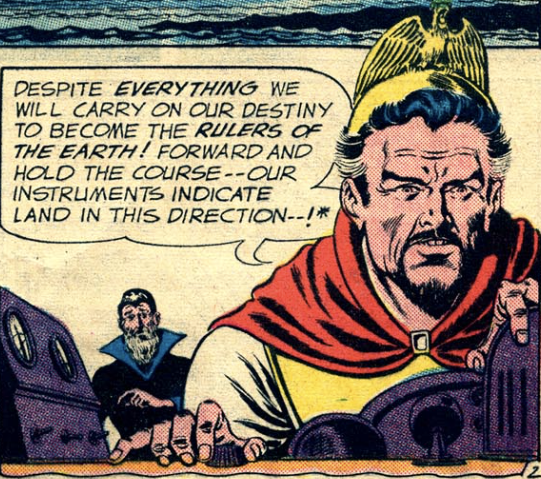 The Atomic Knights return in Strange Adventures #132, July 1961. The story picks up where the previous one ended: the Atomic Knights have rescued seeds and fruits from the now-sunken, time-displaced island of Atlantis after their cobalt bomb went off in present-day 1990. Got all that? The scientists in Atlantis learn they have been displaced in time, and their leader makes it clear that Atlantis’ destiny is to become the rules of the Earth.

Meanwhile, an unknown number of weeks pass and the Atomic Knights are celebrating “Thanksgiving” in Durvale, after being able to accelerate the growth of seeds and removing radiation from the soil.

And just as everyone blesses the feast and professes thanks that Earth is at peace, the Atlantides attack. Thankfully the Atomic Knights are able to vanquish their foes and take some hostage.