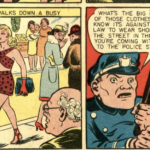 In Comic Cavalcade #12 (September 1945), Dalma the Amazon gets jealous of Wonder Woman’s adventures and decides to remove her bracelets and leave Paradise Island. In a wacky mix-up, she mugs a girl, steals her clothing and then fails to put it on properly, resulting in a scandal where she walks down the street in […] 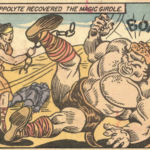 In July 1942, Wonder Woman joins the ranks of Superman, Batman, Flash and Green Lantern in getting her own self-titled regular comic book. Wonder Woman #1 features a much expanded origin story both of Wonder Woman and of the Amazons, including Queen Hippolyte (later Hippolyta) facing off against a ridiculously muscle-bound Hercules. 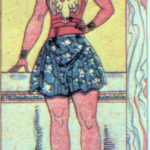 In All-Star Comics #8 (October 1941), the third of DC’s “Trinity” finally arrives: Wonder Woman! Tucked behind a Justice Society of America story (in which Hourman and Green Lantern have been replaced by Starman and Dr. Mid-Nite), Dr. William Moulton Marston, aka Charles Moulton gives us the definitive Wonder Woman origin story. This story has […]