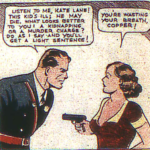 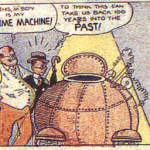 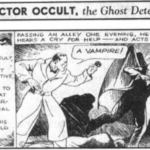 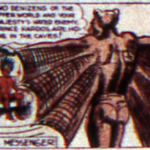 Brad Hardy was 3/4 page adventure strip written and drawn by Richard Loederer in New Fun Comics.  This is a panel from New Fun #5 (July 1935) inside the Cave of the Golden Bat as Brad and his girlfriend were fighting Rat People.  Nice pencil work on the bat wings! 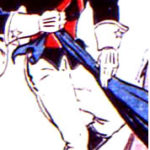 New Fun Comics #2 continued to publish new comics including several adventure stories.  The Magic Crystal of History appears to be the first instance of time travel in a comic book story.  I hope they made it out of Ancient Egypt ok! 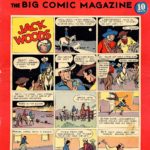 Before 1935, comic books were an unprofitable experiment by one company: Eastern Color.  Starting in January 1935, this experiment becomes an industry as a new company enters the arena with New Fun Comics #1 by National Allied Publications. New Fun Comics was black and white and contained things like funny animal strips and western stories […]