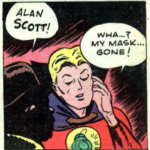 In All-American Comics #35 (December 1941), for the first time, a superhero’s secret identity is revealed to one of the supporting cast. Doiby Dickles learns that Green Lantern is actually his friend Alan Scott. 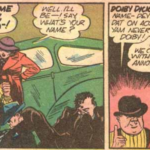 DC and National Comics seem to be upping their “supporting character” game in mid-1941. In All-American Comics #27 (April 1941), Green Lantern introduces a comic relief supporting character named Doiby Dickles. I agree with this article that Doiby is one of the worst sidekicks of all time. I’ve never been a fan of mixing slapstick […]