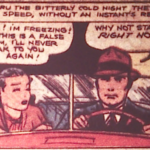 The witty repartee between Bart and Sally continue in Spy from Detective Comics #14 (March 1938). 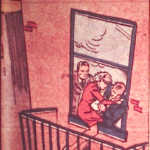 Sally Norris is mostly definitely not a damsel-in-distress and is continuing to prove her worth as Bart Regan’s partner / sidekick in “Spy”, by Detective Comics #9 (October 1937).  She bails out her boyfriend with tear gas from her purse (!) and rescues everyone.