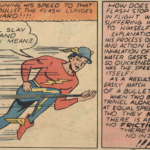 November 1939 was a big month for All-American Publications, as it debuted its second title, Flash Comics. In issue #1, Gardner Fox introduced a couple very important superheroes that would later become part of the DC Universe almost right away (even though All-American would not officially merge with DC for a half a decade). The […] 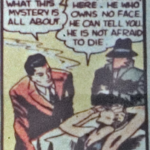 In Detective Comics #34 (November 1939), Bruce Wayne meets up with a woman whose brother had his face burnt away by a terrible ray… those pesky terrible rays. The mad is not The Question, but I thought he looked similar enough to the character created thirty years later that I would include it here. While […] 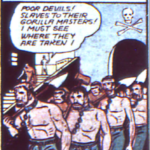 In Action Comics #19 (October 1939), Zatara visits a city full of gorillas with human slaves, a full generation before Planet of the Apes. Crazily enough, this is not the fabled African Gorilla City that bothers the Flash decades later but a different city of gorillas in Mexico (?!?) made by a mad scientist who […]

In Detective Comics #33 (October 1939), the Batman is finally given an origin story – and wow, what a powerful page and half that is! Apparently Bill Finger wrote this part of the story (the rest being written by Gardner Fox) and the words combined with the iconic imagery of Bob Kane continue the dark […] 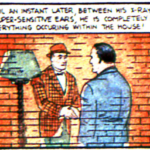 In Action Comics #18 (September 1939), Superman used his x-ray vision for the first time (his super-hearing had been hinted at in a previous story). I picture what is happening with Superman’s powers here as a sort of “arms race”, since I’m sure Jerry Siegel had constant pressure to make Superman more exciting than other […]

Wow – we finally get to move on from August 1939 to September 1939! Gary Concord, the Ultra-man debuted in All-American Comics #8 and was created by “Don Shelby”, a pseudonym of Jon L. Blummer. He took some interesting elements of Buck Rogers, Doc Savage and Superman and rolled a new character set in the […] 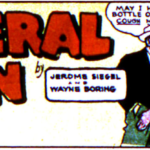 In Adventure Comics #42 (August 1939), Wayne Boring gets credit alongside Jerome Siegel for “Federal Men”. It sounds like Boring had been “ghosting” already for Joe Shuster, so I’m not sure why he was suddenly openly credited here. 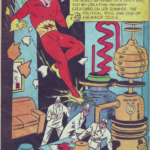 In August 1939, Shock Gibson appeared in Speed Comics #1 by Brookwood Publications (later absorbed by Harvey Comics). Lightning struck chemicals which splashed on poor Charles Gibson, gifting him with incredible strength (and apparently invulnerability). The next logical step, of course, in the Golden Age of Superheroes is to don a skin-tight red costume, and […] 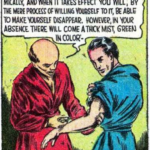 Another final interesting moment in August 1939 came from Amazing-Man Comics #5 (Centaur Publications) and the debut of “Amazing-Man”. The Amazing-Man was also know as Aman, also known as “The Green Mist”. He was raised and trained by seven Tibetan monks to a “superhuman degree of physical and mental ability”. His creators were probably Bill […] 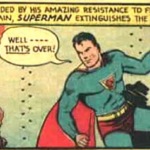 Superman‘s powers continue to expand, as indicated in this panel from Action Comics #17 (August 1939). Thanks to his invulnerability to fire, he nearly single-handedly foils an arson attempt on a steamliner ship, arranged by the Ultra-Humanite.