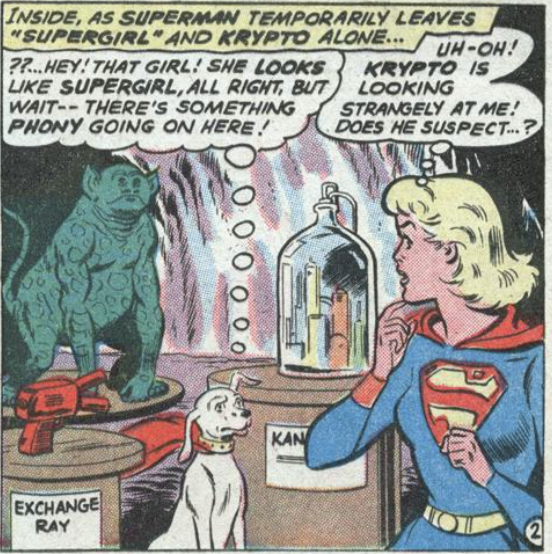 In Action Comics #281 (Aug 1961), the fourth installment in the long-running, multi-month story arc continues as Lesla-Lar masquerades as a recently-re-powered Supergirl. She goes with Superman to the Fortress of Solitude, while the de-powered Supergirl continues to live out her best life with amnesia in the bottled city of Kandor. While there, Krypto sniffs out that Lesla-Lar is the imposter Supergirl and uses an “Exchange Ray” to swap Linda Lee with Lesla-Lar.

Confused why Supergirl’s powers have vanished again, along with a case of amnesia, Superman takes the now-de-powered Supergirl back through the time barrier to 1691. Because Lesla-Lar’s de-powering ray was never trained on Supergirl in the past, Supergirl’s powers return. Nice debugging, Superman!

With a flimsy excuse that he has to take care of something in the present, he leaves Supergirl in the past and says he will meet her when she materializes in 1961. This gives Supergirl a chance to have a little standalone adventure where she is mistaken as a witch in by early American colonists. After sorting all that out, she races through the time barrier and upon materializing has lost her powers again. Luckily Superman is there to catch her.

Disappointed that Superman will not be able to reveal her existence to the world again, she lays down to sleep while Lesla-Lar waits to change places with her again.