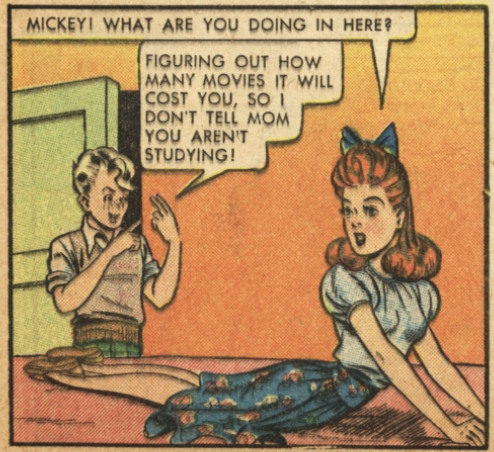 Timely Comics (aka Marvel Comics these days) introduced a new female character in Miss America Comics #2 (September 1944): Patsy Walker. Although the Patsy Walker feature was in the “teen humor” genre, like Archie, I did learn from Wikipedia that she is an important character for Marvel because she one of the few that bridged the Golden Age (as Timely Comics) through the mid-years (as Atlas Comics) and into the Silver Age (as Marvel Comics).

Patsy Walker is also unique because she went through a transformation in the 1970s from teen humor to eventually became a superhero in the Marvel Universe. Patsy also showed up as a supporting character in the Netflix Jessica Jones series. I guess the early panel above showcases her crazy physical flexibility?