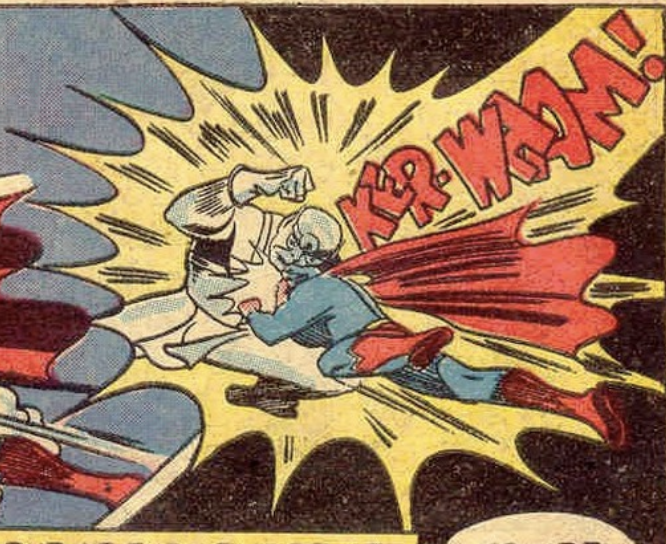 Right next to the lackluster comedic story of Lois-as-Superwoman, Superman #45 (January 1947) also featured a pretty cool story in which Superman is actually physically challenged for once! An inter-dimensional being appears on Earth and starts collecting Earthling specimens for his trophy collection. What ensues is a pretty intense battle between Superman and this unnamed being.

Superman fakes blacking out so that the being will take him to his dimension so he can try to rescue the other captive humans.

We so rarely see Superman physically challenged at this point. Most stories are about how ingeniously he uses his powers to fool someone or keep his identity or whatever – so this is a pretty interesting story! How will Superman be able to best this foe if he’s as strong and invulnerable as him and has now imprisoned Superman with paralyzing gas in another dimension?

Woops, I spoke too soon! While paralyzed and in captivity, Superman realizes he can use “telepathic will control”… a new power the writers have invented on the spot to make Superman less interesting in future stories! He then uses his powers of “super disguise” to fool the other inter-dimensional creatures and to rescue all the humans.

This might just be the perfect example of how lazy writers just didn’t really know how to keep Superman interesting. They pit him against a foe who is almost as powerful as him, show a couple panels of an intense battle, and then Superman pulls out another couple powers to defeat him.