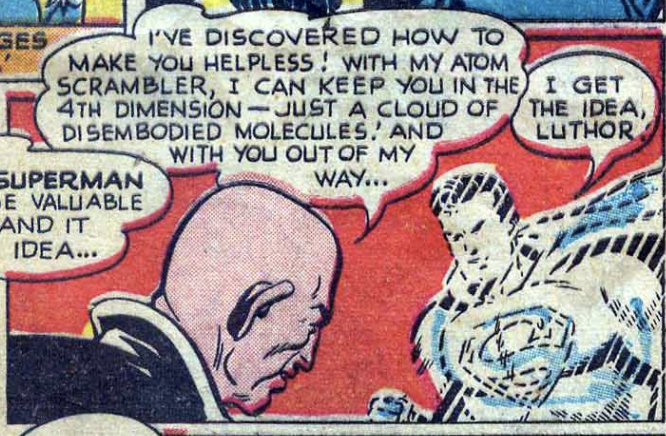 Luthor manages to create a teleporting device in Action Comics #131 (February 1949). While committing crimes with them, he manages to accidentally teleport Superman, and then decides to trap him in “the 4th dimension”. While Superman is trapped there, he is invisible to everyone but can still move and see things that are going on – much like the Phantom Zone would occasionally be protrayed. He manages to somehow affect the electric current in Lois Lane’s new electric typewriter and convinces her to rescue him.

One big thing that bugs me about stories that start to bubble up around this time is the amazing tech that Luthor or Superman are able to produce, yet the world continues on much as the same in later “episodes”. Though Superman destroyed the “atom scrambler” and sent Luthor off to jail, Luthor should have just created a new one when released. The discovery of a means of teleportation should have been re-used and affected DC’s world-at-large in huge huge ways, yet DC Comics consistently showed a pretty big discontinuity in its effort to tell interesting stories. Sloppy writing – or a simply a symptom of trying to write fantastical stories in a continuous setting over the course of decades?

One cute “B-story” here was Clark getting fired from the Daily Planet for writing what appears to be a libelous story about well-known criminals committed a bank robbery. It was a trap by Luthor, who had teleported them across the country and made sure witnesses were able to validate that the criminals were nowhere near the bank vault at the time. Clark getting fired from the Daily Planet was a nice little trope that was reused to shake things up throughout the years.