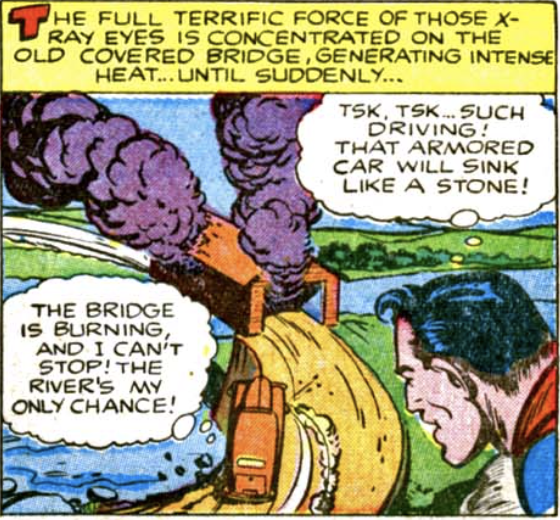 Only one month after Superboy first uses his heat-vision, Superman does the same in Action Comics #139 (Oct 1949). In a typical lazy-writer stunt of the time, Superman sets fire to an old covered bridge to force the criminal driver into the river. Why not just use your super-speed to catch the car? At least we see a thought bubble where Superman plans to rebuild the bridge.

The story is mostly about Clark Kent acting like a daredevil to maintain his job, since the publisher wants Perry White to trim the staff. Lois Lane re-treads the by-this-time-tired idea that Clark is Superman. Superman foils her attempts by using super-ventriloquism, a wax dummy, and a gas-filled balloon that looks like Superman – demonstrating yet again how lazy writing can destroy otherwise intelligent characters for the sake of the plot-of-the-month..