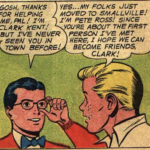 In Superboy #68 (Nov 1960), “The Boy Who Betrayed Clark Kent!” introduces the character of Pete Ross, expanding Superboy’s supporting cast. Newly moved to Smallville, Pete Ross stands up to bullies for Clark Kent and Clark decides to befriend him, learning that Pete’s hobbies include acting and detective work. Later, Clark becomes suspicious of his […]

In Superman #142 (Nov 1960), Superman encounters a “flame-dragon from Krypton”. The beast appears and breathes fire at Clark, incinerating his clothes in front of Lois. It’s mostly a cutesy-but-tired-and-unrealistic story about how Superman manages to yet again disprove her “Clark-is-Superman” theory (with the help of Batman and Supergirl this time). Superman wraps up the […]

The cover of Action Comics #258 (Sept 1959) shows Superman dramatically exiling Supergirl from Earth. Supergirl meets Krypto for the first time, so she harmlessly plays with him – but woops, this is still early in her career when Superman has told her to keep her existence a secret – and that includes Krypto. When […] 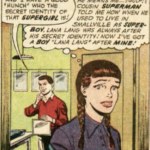 Action Comics #256 (July 1959) sets up Supergirl’s “Lana Lang” with a new character, Dick Wilson. He accidentally snaps a picture of Supergirl flying and starts to suspect fellow orphan Linda Lee is actually Supergirl. Superman bails her out by providing a Supergirl robot that Linda can use in such emergencies.

Lois Lane’s solo comic is providing many more instances of Superman being petty and using his abilities frivolously. In Lois Lane #8 (Feb 1959), for her birthday – but really just to “teach her a lesson” – Superman decides to give Lois Lane his super-powers. Clark then proceeds to put her into a series of […]

In Superman #126 (Nov 1958), Superman gets super-amnesia again when he decides to spend Clark Kent’s vacation on coming up with a cure for Kryptonite in his Fortress of Solitude. A freak explosion wipes out Superman’s memory. After quickly learning about his powers, he instinctively flies back to Metropolis where he decides to take on […]

In World’s Finest #90 (July 1958), Elton Craig makes a re-appearance. Craig escapes prison and Superman and Batman fear he has secreted some of his super-power capsules. Kathy Kane also hears the police bulletin and dons her Batwoman outfit to help the World’s Finest team, finding the capsules before Craig and becomes super-powered. After being […] 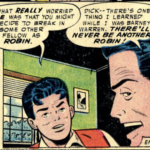 Complete with a cheeky sidelong glance to the reader, Detective Comics #237 (September 1956) seeks to ensure Dick Grayson that there will _NEVER_ be another Robin. “Search for a New Robin” finds Bruce Wayne seeking a new identity as “Barney Warren”. While sinking into his new identity, he encounters a couple of brash youngsters and […] 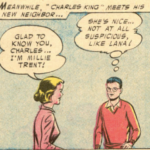 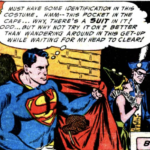 Well it’s been a couple years since we’ve had a prominent Superman-gets-amnesia story, so it’s time for World’s Finest #68 (Nov 1953) and “The Menace from the Stars!”. In this story, Superman saves the planet from an asteroid by smashing it and forcing it into a steady orbit around the Earth. Unfortunately, a spectroscope reveals […]