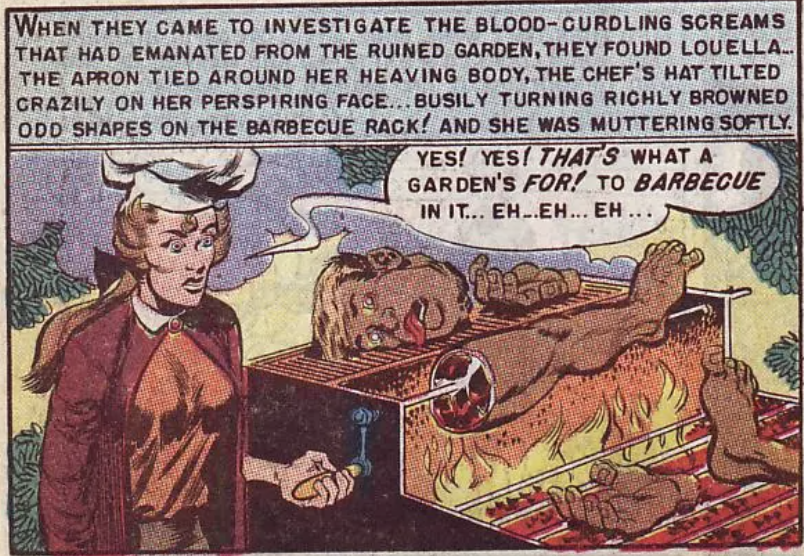 Speaking of dismemberment, The Haunt of Fear #17 (December 1952) also features a story drawn by Jack Davis called “Garden Party!”. A wife is driven insane by her insensitive boob of a husband who tramples her prize petunias during a barbecue – naturally she dismembers him and roasts his bits on the barbecue.

EC Comics standards of what they will show and talk about are getting pretty outrageous by the end of 1952. Having read enough of it, I can see why they went after EC for juvenile delinquency – I don’t think it was just about sales threatening rival comic book companies. Some of the stories around husbands casually murdering their wives really made me cringe and they are definitely not meant for kids consumption.

Anyway, Jack Davis was a favorite of mine from my days of reading Mad Magazine and various paperbacks. There was something about the way he drew people’s proportions, contortions and facial expressions that I loved.

This blog is now two years old! I guessed wrong last year and have only traversed another 7-8 years of comic book history in one year of blogging, but the discovery of many elements of the Silver Age hiding about in the early 1950s made it more interesting than I thought it would be! Since EC Comics only has another year and half of publishing left, I would guess we will enter the true Silver Age some time early next year and be within the Marvel Age of Comics by this time next year. Let’s see if I’m right!