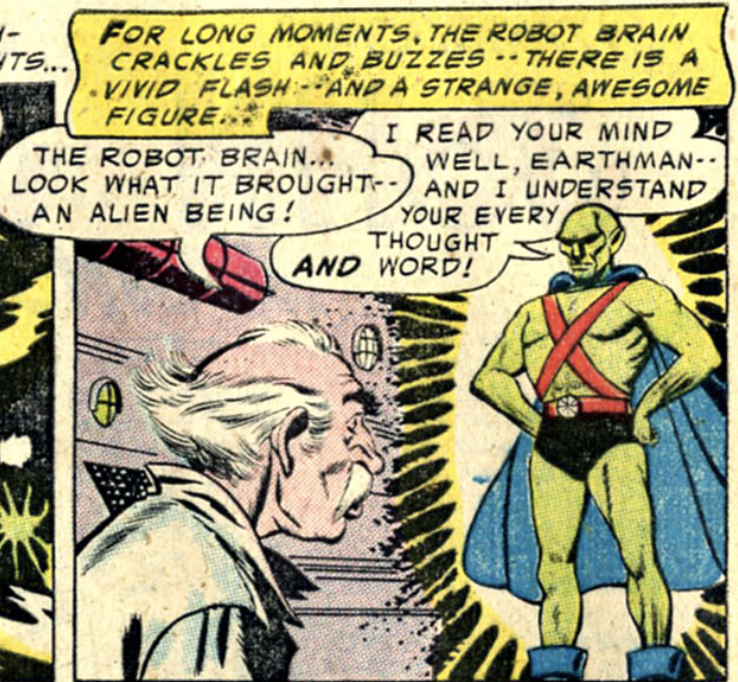 In Detective Comics #225 (September 1955), another Silver Age superhero debuts: John Jones, Manhunter from Mars. Poor J’onn J’onnz is brought across space (and from an unspecified time period) to Earth by Professor Mark Erdel, who subsequently dies of shock before he can send him back to Mars.

J’onn J’onnz reveals he was a scientist, has shape-shifting powers, takes up the mantle of “John Jones” and becomes a detective to fight crime. He also uses his powers to extract gold particles from the sea water, turns invisible, and is vulnerable to fire.

It’s really exciting to see a member of the original Justice League of America finally make an appearance – only two left to go now!

On the other hand, with this entry I am going to put the blog on pause, yes – even as DC’s Silver Age is just beginning! I have been distracted with other writing projects more recently and have run out of backlog articles here. I plan to keep following comic books and taking notes, especially now that we are less than a year away from the debut of the Silver Age Flash. So when my backlog gets nice and full again, I’ll start the blog up again!