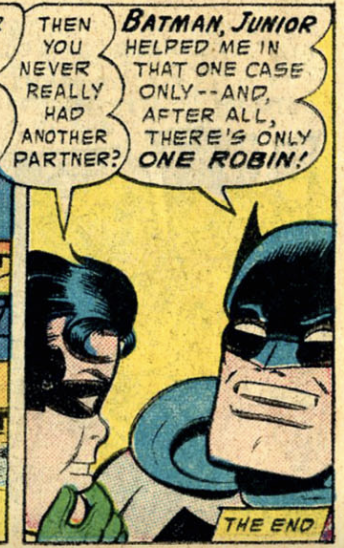 In the Batman feature of Detective Comics #231 (March 1956), Robin learns that early in his crime-fighting career, Batman took on a partner called “Batman Junior”. Batman Junior was John Vance, a rando kid who got caught up in a case of Batman’s. Robin exhibits jealousy and sadness at not being special, but Batman assures Robin that Batman Junior was just a one-time thing and it meant nothing to him. Of course Dick Grayson has a world of hurt coming to him in the future when Batman takes on not one, not two, but three additional sidekicks called Robin 😀