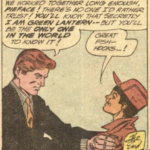 In Green Lantern #2 (July 1960), Green Lantern (Hal Jordan) gets a confidante just like Roy Thomas suggested he should in an Inuit mechanic friend, Thomas Kalmaku aka “Pieface”. I’m pretty sure “Pieface” is referring to the round-ness of the face. Despite that racist nickname, the character is not depicted as a racist caricature, but […]

No, we’re not quite done with the 1950s yet. One or two more interesting bits appeared on the newsstand in December 1959. This time, it’s the debut of Aqualad, a predictable sidekick for Aquaman. Aqualad is never given a name in this first story, but harkening back to the story of Aquagirl, Aquaman explains to […] 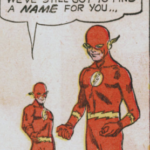 In Flash #110 (Oct 1959), Barry Allen meets Iris West’s nephew, Wall West for the first time. And wouldn’t you know it, the exact same lightning bolt + random chemical accident happens to the poor kid while the Flash is showing him around the laboratory. Of course the kid gains super-speed, so naturally let’s set […] 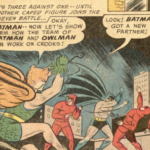 In Batman #107 (Feb 1957), Dick Grayson (Robin) accidentally is exposed to a gas that ages him to adulthood. Yep, it turns out that Superman was too busy to analyze a lead-lined device he found in space, so he left it with Batman, and poor Robin took a blast of space gas in the face. […] 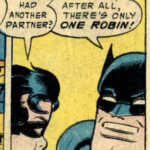 In the Batman feature of Detective Comics #231 (March 1956), Robin learns that early in his crime-fighting career, Batman took on a partner called “Batman Junior”. Batman Junior was John Vance, a rando kid who got caught up in a case of Batman’s. Robin exhibits jealousy and sadness at not being special, but Batman assures […] 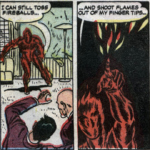 In Young Men #24 (August 1953), Atlas (Marvel) Comics attempted to revive its three most popular Golden Age superheroes. First, the Human Torch steps into the spotlight after a 4-year hiatus, explaining his super-powers to the readers, er criminals, narrating his history wherein he explains that he burned Hitler to death: And ensuring everyone still […]

In Detective Comics #185 (May 1952), Batman loses his utility belt which contains a pin that, when sprayed with a special chemical, will reveal Batman’s identity. Batman thinks this is a good idea because something might also happen to Robin. Ok, but isn’t it more likely that you’ll die and then reveal your and Robin’s […]

In Captain America #71 (December 1948), we see some rare glimpses of Marvel continuity when Bucky Barnes is finally healed up in the hospital after being shot six months prior and returns to active duty. I guess it was too premature to call Timely (Marvel) done with boy sidekicks – Bucky was not written out […] 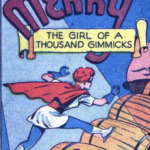 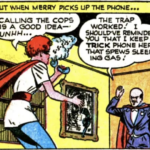 As mentioned previously, lots of male superheroes were being given sexy female sidekicks as replacement for their teenage / young boy sidekicks in 1948. Merry, Sylvester Pemberton’s newly adopted sister, becomes Gimmick Girl in Star Spangled Comics #81 (June 1948). On the Timely (Marvel) side, the Human Torch ditches Toro for Sun Girl who even […]