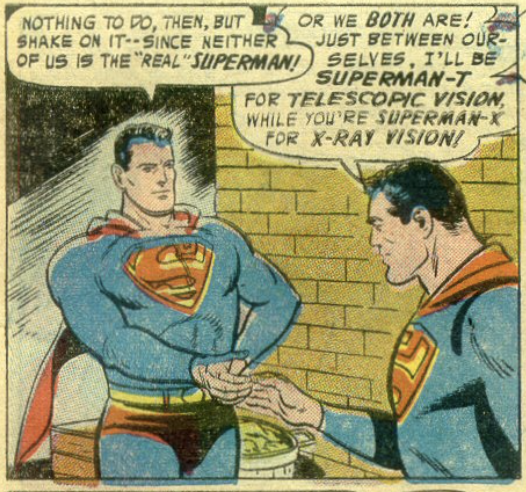 Though Batman may be insisting on only One Robin for now, Action Comics #222 (Sept 1956) brings us “The Duplicate Superman”. The government sets off a new experimental bomb, the Q-Bomb, and Superman is caught in the blast, resulting in the splitting of Superman into two nearly identical beings. It turns out they are identical in every way except one is missing Telescopic Vision while the other is missing X-Ray Vision.

This provides a nice little side hustle with Lois, seemingly proving that Superman and Clark Kent are, in fact, two separate people.

Ultimately, Superman-T sacrifices himself to deflect a giant kryptonite meteor, restoring telescopic vision to the other Superman.

This is the first, but definitely not the only time Superman will be “cloned”, the most famous of which is probably Bizarro.