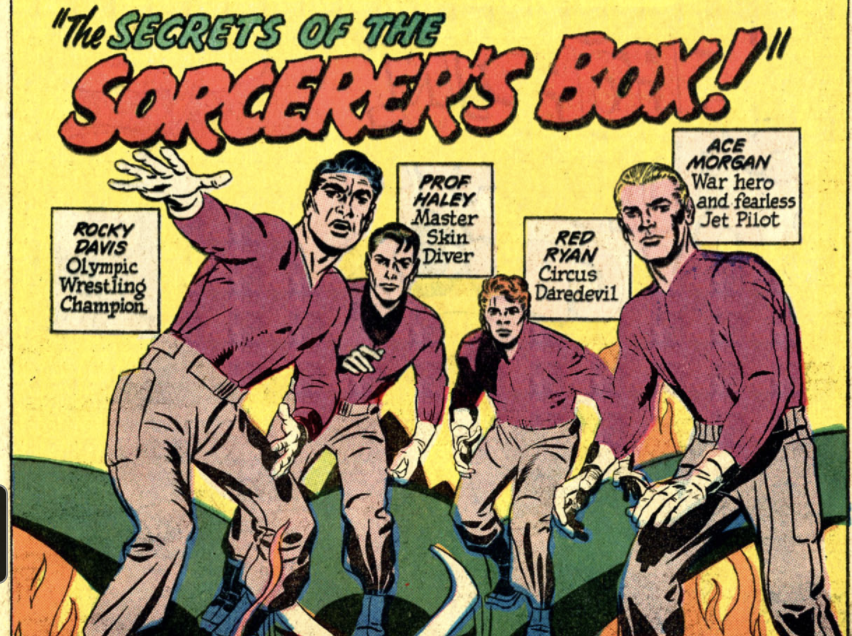 In November 1956, DC introduced a new group of heroes in Showcase #6: The Challengers of the Unknown. Most folks credit Jack Kirby in some way with the creation of this group, which consisted of four daredevils: Rocky Davis, Prof Haley, Red Ryan and Ace Morgan who, after miraculously and inexplicably surviving a plane crash decide they are living on borrowed time and must dedicate their lives to “take a few more risks” and “challenge the unknown”.

This first adventure pits them against a sorcerer bent on uncovering the secret of eternal immortality, who pits the Challengers against various … challenges, including a stone giant, a freezing sun, and the like. The book-length tale is a full 24-pages, broken up into a couple chapters, and it really gives a chance to set the tone and characters, complete with just-slightly-baggy skin-tight purple uniforms, Kirby krackles, intricate backdrops, and messy blotches of ink that become a staple of early Marvel books.

The Challengers of the Unknown are the first in a generation of “idea-borrowing” that happened between DC and Marvel over the course of the next several years. It is pretty clear to me that there is a “genealogy” of groups that start with the Challengers, moves to the Fantastic Four, then back to the Doom Patrol, then on to the X-Men and Teen Titans.