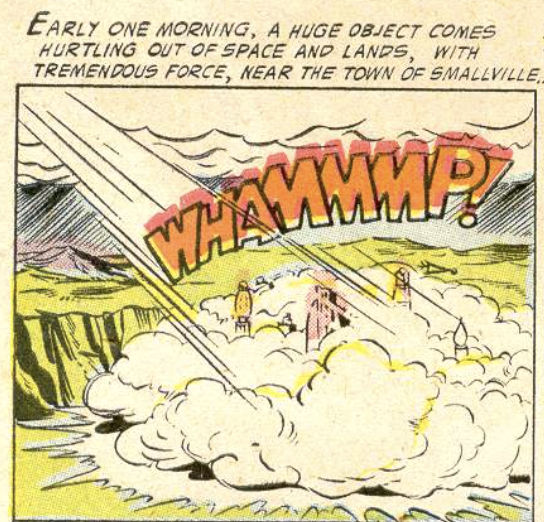 Early one morning in Adventure Comics #232 (Nov 1956) – with a solid WHAMMMP! – another intact Kryptonian city lands on Earth, this time right next to Smallville…. ಠ_ಠ

In terms of lazy writing, this one might just take the cake. The Kryptonian city chunk happens to contain the very house where Kal-el was born, but unfortunately Superboy can’t go explore it because it the city chunk is made up of pure Kryptonite.

Nonetheless, Superboy finds a note which Jor-El left his son, asking him to perform three tasks to honor Krypton’s memory. After building a park and saving a planet he fails to find a way to perform the third task: reading and studying all of Krypton’s works. He later discovers the Kryptonian city has a protective coating over its Kryptonite . When he sits in the childhood home and cries, Jor-El’s tape activates…

Ultimately Clark is able to learn about Krypton’s legacy from Jor-El’s film tapes. Unfortunately, the protective coating starts to wear off, so Superboy figures out a way to literally fling the city back into space… ಠ_ಠ