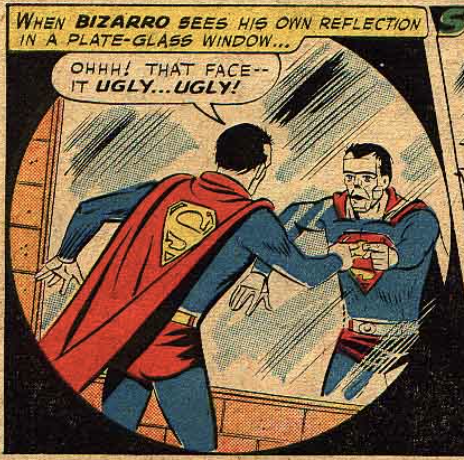 In Superboy #68 (Aug 1958) sees the introduction of one of Superman’s sillier heroes: Bizarro! Accidentally created by Professor Dalton using a “duplicator ray”, the imperfect copy of Superboy innocently wanders around Smallville, much like Frankenstein’s monster. After several acts of Bizarro are mistaken as menacing, Superboy decides the creature is not living (wtf/) and he decides to destroy it, at first tackling him with kryptonite.

To Superboy’s dismay, he was not able to murder Bizarro with kryptonite… Bizarro is immune to nearly everything! Luckily Bizarro wanders past a scrap yard and is weakened by some “glowing metal”. It turns out the faulty duplicator ray was irradiated in an explosion, and Bizarro is vulnerable to that. Let the cajj murder continue!

Regular letter pages as features in DC comics started one month earlier in Superman #124 with the “Metropolis Mailbag”, but this issue’s first “Smallville Mailbag” has an interesting one, the first request for a Superboy-Robin team-up:

Of course Superboy being the younger version of Superman lives in a different time period, so that makes it a little tricky.