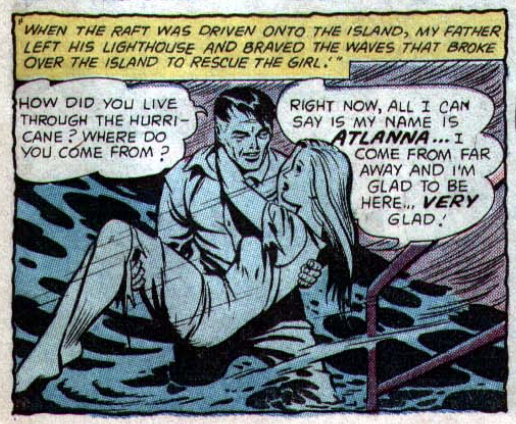 18 years after his debut, Aquaman’s origin gets a complete re-tooling in Adventure Comics #260 (March 1959). This seems like DC wanted to bring Aquaman into the Silver Age in a big way. Aquaman is forced to reveal his origin story to a submarine commander who is testing nuclear depth charges in the ocean. The story is written by Robert Bernstein.

Aquaman’s father was Tom Curry, an ex-sailor and a lighthouse keeper who rescues a strange woman named Atlanna in the ocean waters off the coast of the island. They fall in love, marry and have a son which they name Arthur.

His father soon discovers that Arthur has strange abilities: he is a master swimmer, can breathe underwater and can communicate his thoughts to sea creatures.

On her deathbed, Atlanna reveals she is from the sunken land of Atlantis, where her people had adapted to live under the water, and that Arthur has inherited her abilities and should become “Ruler of the Oceans”.

Arthur begins to accomplish feats in the oceans, and communicates his desire to help all sea creatures. The word spreads and he is paid homage, and that pretty much wraps up his origin story, other than the fact that his father eventually passed away.

After finishing telling his tale to the submarine commander, Aquaman whispers to him (not to the reader) that the place where they are testing nukes is directly over the Land of Atlantis, so the commander agrees to stop tests in the area. The last panel gives us the reveal.

Will Aquaman return one day to Atlantis? This is a really nice bit of world-building for a character that had 18 years of stories with zero backstory or supporting characters. Pretty soon Aquaman would indeed return to Atlantis, gain a sidekick, a girlfriend, some nemeses, and his stories started actually becoming a bit more interesting.