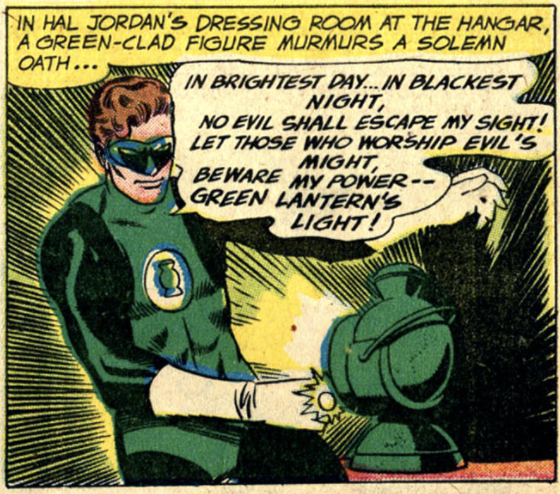 Showcase #22 (July 1959) finally brings us the last of the original Justice League members: The Silver Age Green Lantern. Hal Jordan, a revival of the Golden Age Green Lantern but changing the battery/ring explanation from magic to pseudo-science. Hal, a test pilot for Ferris Aircraft Company, is summoned by the dying Abin Sur to become the new Green Lantern of this sector of the galaxy. Green Lanterns are described as “space-patrolmen in the super-galactic system… to be used as a weapon against forces of evil and injustice”.

Before dying, Abin Sur gives instructions on charging the battery and to watch out for the color yellow, which is the ring’s only weakness due to an impurity in the battery. This is another difference from the Golden Age Green Lantern’s whose weakness was being hit on the head with a piece of wood. I can’t possibly make these things up.

Hal’s prospective love interest is Carol Ferris, the daughter of the owner and founder of Ferris Aircraft. Her father announces that he is putting her in charge of the company for two years, which sets up a romantic barrier between Carol and Hal, since Carol is now Hal’s boss. I internally associate the mid-1960s with stronger feminist movement, but Carol Ferris seems like a pretty good step in that direction, at least in this first issue.