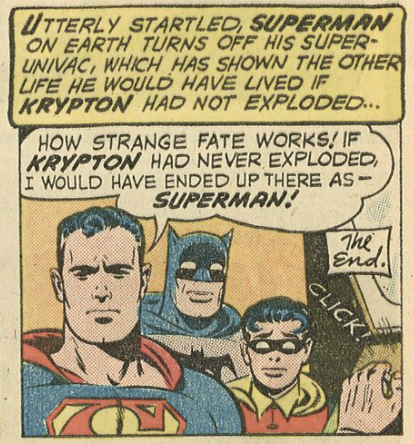 In “Superman’s Other Life”, a story in Superman #132 (August 1959), Batman and Robin bringing a special gift for Superman to the Fortress of Solitude. The Dynamic Duo bring Superman pictures he took from Krypton years ago and suggests he put them through his “Super-Univac” to see if it can answer the question:

“What would Superman’s other life have been, if Krypton had not exploded?”

– Question put to Super-Univac by Batman, Robin, and Superman.

Which is, of course, just an excuse to tell an imaginary “What If…?” tale. In it, we see Jor-El redirecting Kal-El’s rocket back to Krypton after it does not explode. It shows Kal-El skinning his knee (ooo!), getting his hair cut (ahh!), gaining a younger brother Zal-El (aww!) and the playing with Krypto the pup and a robot (yawn!).

Lots of other kooky things happen though. Teenage Kal-El wants to join the Space Patrol when he’s older. He befriends Professor Xan-Du who accidentally is exposed to a weird ray from one of his inventions and becomes the planet’s super-hero as “Future Man”. When Kal-El joins the Space Patrol it turns out their uniforms are exact duplicates of Superman’s uniform (oh the delicious, Alanis-infused irony!). A spaceship from Earth destined for the Moon accidentally makes its way to Krypton and it happens to have a stow-away, none other than Lois Lane (wtf?!?).

Meanwhile, Kal-El tries to save his parents and brother after they crash into a magnetic asteroid and becomes an orphan (ouch!). Lois falls in love with Future-Man, so he decides to emigrate to Earth and leave Krypton (really?!?). He leaves Kal-El in charge as the new super-hero after bestowing on him one final charge from the machine (no, but really?!?).

All in all, it’s a cute story, but there are lots better “imaginary stories” to come.