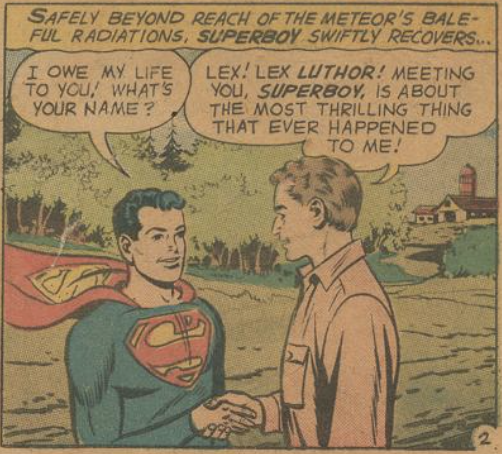 In Adventure Comics #271 (Feb 1960), Superboy meets a new kid in town: Lex Luthor. This is the first comic that uses his full name in the story (though it was mentioned in a previous letters column. Lex starts out as a really smart guy who is also a Superboy fan. He ends up saving Superboy from a kryptonite meteor, and Superboy helps build him a special scientific laboratory.

In it, Lex experiments with creating life from chemicals and decides to find a permanent cure for Superboy’s vulnerability to kryptonite. Unfortunately one of his his experiments causes a huge fire, that Superboy puts out with his super-breath, though it also causes acid to destroy the antidote and the fumes make him go bald.

Superboy tries to patch things up with Lex. Lex concocts a plan to trick Superboy. He invents a temporary kryptonite cure and they go out into space to try it out. Thinking he is permanently cured of kryptonite, Luthor reveals the truth to him and vows to destroy him.