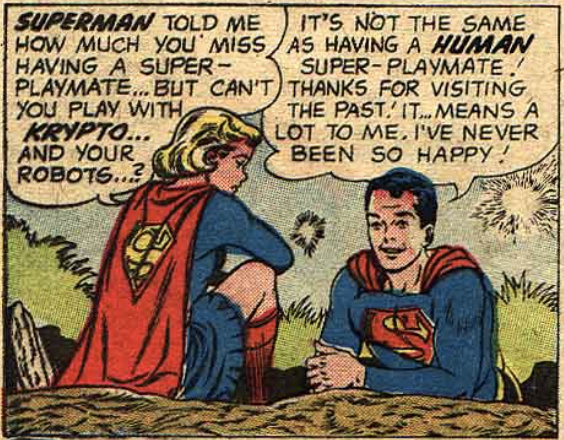 DC continues to weave Supergirl throughout the Superboy family of books. In Superboy #80 (Feb 1960), Supergirl learns from Superman that he was lonely as a teenager without a playmate. Supergirl gets the bright idea to travel back in time to meet Superboy and play with him.

What ensues is a cute story with the two of them having super-races in space, playing leap-frog with meteors, hide-and-seek in the sun, and stumbling on (and stopping!) an alien robot invasion. As the adventure wraps up, Supergirl realizes there is a problem. Superboy now knows about Supergirl’s existence and may accidentally reveal the existence of Supergirl to the world.

So off Superboy goes to “inhale the fragrance of the giant red flowers atop “Purple Triangle Mountain” on the planet Albo, in the foreign galaxy Xurolu” which causes anyone to “forget everything that happened during the preceding week”. Wow, that’s convenient. Also, I like the way that Superboy refers to Superman in the third-person….

I wonder what Ma/Pa Kent thought Clark was doing for a week… anyway, I really enjoyed the story! I think Supergirl gets somewhat replaced as a playmate / confidante by Pete Ross and the Legion of Super-Heroes in the, erm, future.