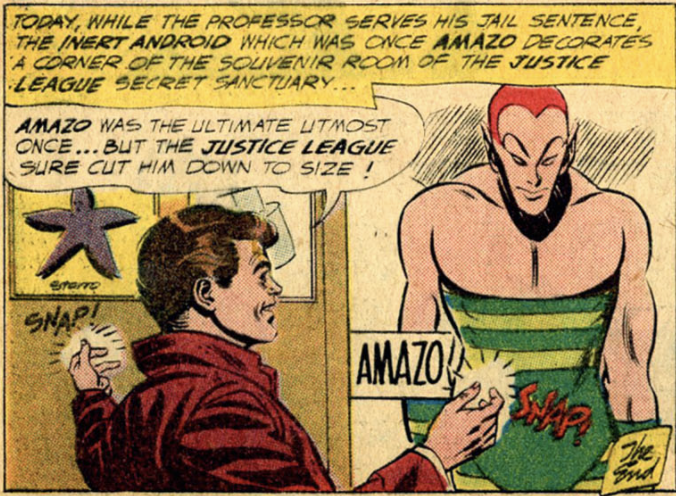 The Justice League returns for their third adventure in Brave and the Bold #30 (April 1960) to battle Amazo, an android created by Professor Ivo that can temporarily steal the Justice League members powers. Superman and Batman are kept busy again so they barely appear in the story. Lame.

Martian Manhunter is first to fall prey as Amazo seeks out samples of beings that have an unusually long lifespan.

The heroes are kept powerless and encased in chlorine-gas filled containers by Professor Ivo, who wants to create an immortality elixir, which he finished and drinks. I guess he’s immortal now!

As they are about to transfer all of the JLA powers into Amazo permanently and give them amnesia using Amazo’s copy of the Green Lantern ring, GL sucks in the chlorine gas and expels it around his face, blocking the ray. It saves the day and Ivo goes to jail (for 500 years!) and Amazo is de-activated and stored … on premises in the JL headquarters for Snapper to annoy.