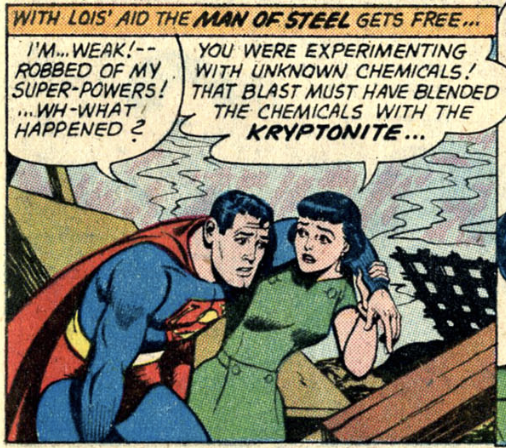 We have had many stories before about Lois becoming “Super Woman“, usually done to explore some aspect of the love triangle between Superman-Lois-Clark, and Action Comics #274 (Jan 1961) is certainly no exception. This time it’s exploring whether Lois loves Superman for who he is, or because of his amazing abilities and his fame.

Lois accompanies Superman to the Fortress of Solitude and I’m actually not sure we’ve ever seen that before. While helping Superman with an experiment involving kryptonite and “mind-power” helmets, Superman suddenly loses all of his powers in an explosion. Minutes later, he decides to propose to Lois (without even knowing if the powers are permanently gone!). Lois postpones answering the question because she has doubts about her true motives:

They have one of the Superman robots fly the both of them back to Metropolis (clever). A dejected Superman hopes Lois will marry him, Lois reflects how his personality has changed, so she decides to “date some other attractive men” to know whether she still prefers Superman above all others. A couple of unsuccessful dates/panels/days later and behold! Lois discovers she has all of Superman’s powers. She quickly dons the costume she got back when Superman had temporarily given her and Lana powers (Lois Lane #17) to save the day.

For the next several pages, we are treated to some Lois super-heroics and Superman’s pride being hurt since she needs to save him all the time. Lois realizes that any marriage between a Super-Lois and a de-powered, humiliated Superman would be unsuccessful and gently rejects his proposal. Lois tearfully tries to forget Superman. When he shows up at her office to ask for a goodbye kiss he collapses, Lois discovers her powers have faded, and then the real Superman flies into the window.

It seems that while the real Superman was away on an outer-space mission, one of his robots hatched a plan to test Lois Lane’s motivations:

The robot wanted to see if Lois Lane would love a de-powered Superman. He concludes that she would not, since she rejected his proposal.

Lois is distraught at how badly this reflects on her.

Superman kind of apologies for the actions of his creepy robot. There is a moment when Lois Lane is actually speechless.

But that Big Blue Boyscout shows some impressive human insight. He tells her that her rejection of the proposal was actually the right thing to do – and this restores her faith in her hero once more!

From the artwork and character perspective this story surely must have been meant for the Lois Lane comic, but maybe someone “promoted” it to Action Comics because of its higher quality and dramatic content? I thought it was interesting that Clark Kent does not appear at all in the story at all.

But what I really liked about this story was, despite a lot of internal monologuing by Lois, the reader is still presented with many ambiguities. How does Lois truly feel about a de-powered Superman? Did she reject him because his personality had changed? Would a de-powered couple or a super-powered couple actually work? When Superman learned of all that happened, was he hurt by Lois rejecting the proposal?

Ok, maybe I thought too long about this story, but it was definitely one of the best Lois-as-Superwoman outings!