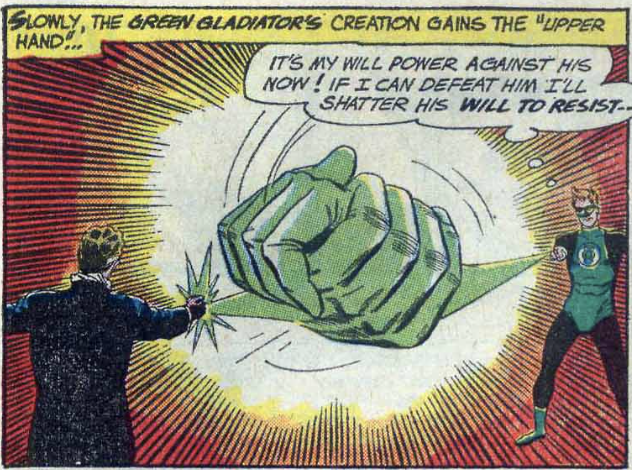 Green Lantern #5 (Jan 1961) introduces a new villain for GL in Hector Hammond. In this first tale, Hector has found a meteorite and secretly kidnapped and exposed four scientists to its radiation, forcing them to mutate and evolve along future lines of the human race. This involves giant craniums, feeble willpower, and the ability to invent new futuristic technology, apparently. Hector takes advantage of the new technology to become wealthy and famous, attracting Carol Ferris.

Hal (Green Lantern) Jordan realizes that Hector Hammond’s inventions are all based on four sciences: chemistry, physics, astronomy, and biology, which happen to be the specialities of the missing scientists. Hal uses his ring to transform Pieface into a substitute Green Lantern, complete with a duplicate power ring, then secretly goes to look for these scientists.

Unfortunately Pieface is not a very good Green Lantern and is quickly kidnapped, with Hector Hammond taking the duplicate ring. We then get a nice showdown and contest of wills when the real Green Lantern eventually arrives on the scene.

Hector Hammond is put into prison and GL de-evolves the four scientists and releases them.