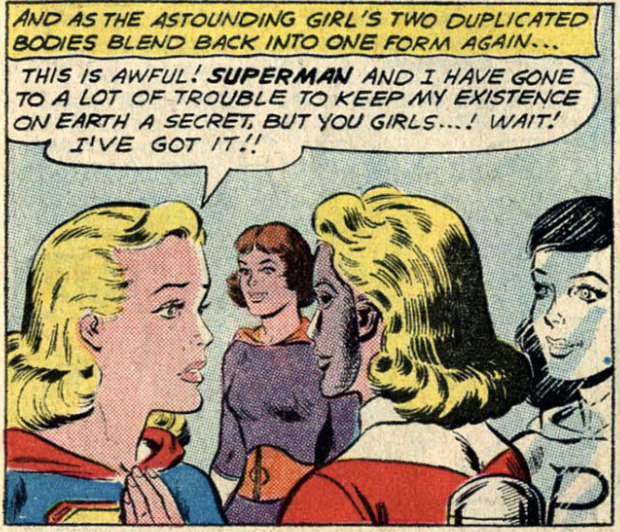 More Legionnaires are introduced in the Supergirl story in Action Comicsd #276 (March 1961). This time around, Saturn Girl and two new-to-us members Phantom Girl and Triplicate Girl play pranks on poor ol’ Kara Zor-El and then invite her into the future where they want her to try out again for Legion membership.

That didn’t go so well last year, but this year around they have decided to let one girl and one boy member join.

Anyway, while there, she meets several other potential members ready to try out: Bouncing Boy, Sun Boy, Shrinking Violet, and Brainiac 5. A good deal of exposition is devoted to Brainiac 5 and his villainous ancestor, making Supergirl question whether he is a good guy or a bad guy.

But as we all know, he’s a good guy. Well this time Supergirl makes it into the Legion of Super-Heroes and so does Brainiac 5! Brainiac 5 also makes it clear he has a crush on Supergirl.

This was quite the issue for world-building with the Legion! Up to this point, I think we knew of 5 members (Saturn Girl, Lightning Lad, Cosmic Boy, Chameleon Boy, and Star Boy). This story alone doubles the number of characters they get to play with in future stories.