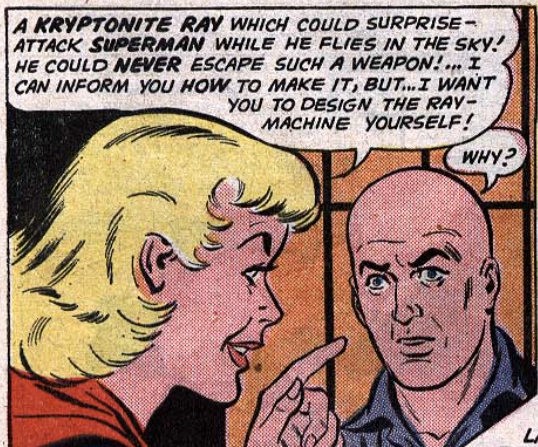 Speaking of Machiavellianism, the long-running Supergirl story arc continues, as a de-powered Linda Lee, having recently been adopted by the Danvers, goes on a school field trip to visit Metropolis’ Daily Planet. There, she meets up with her cousin Clark Kent – I really like the way they depict Clark here, very casual without a sports jacket. He sadly tells her he has had no luck restoring Supergirl’s powers.

Lesla-Lar continues to refine her evil scheme from the bottled city of Kandor. She swaps herself with Linda Lee again, continuing to keep Linda hypnotized into believing she is a Kandorian. Our heroine watches some Kandorian news reels about Krypton, Jor-El, Zor-El, and how Supergirl came to be, while Lesla-Lar meets up again with Lex Luthor and explains how she will teach him to invent a kryptonite ray to kill Superman.

Next, Lesla-Lar convinces Superman that Supergirl’s powers have returned. Superman is confused but delighted and plans to finally reveal the existence of Supergirl to the rest of the world.