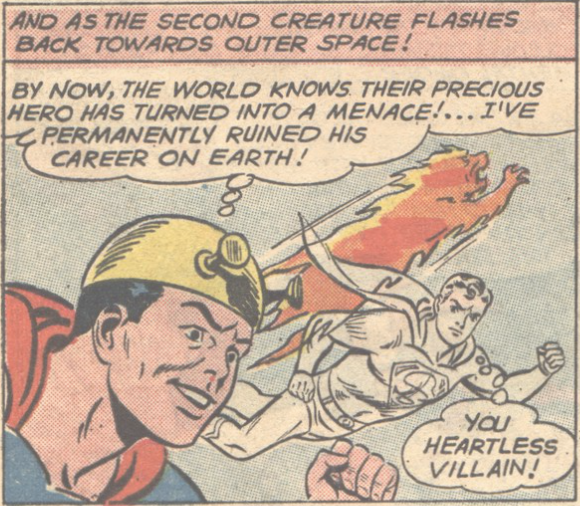 We first met the super-brat Dev-Em last month and Adventure #288 (July 1961) is the conclusion to this tale. Having arrived on Earth, Dev-Em lures Superboy into his suspended animation vehicle where he imprisons Superboy in the Phantom Zone.

Dev-Em then crafts a mask to resemble Superboy and goes about committing horrific deeds, like destroying structures, threatening lives, pissing off his adoptive parents, bringing outer space menaces to Earth, and the like.

Dev-Em’s motivation is not really clear to me. I get that he’s jealous and even pissed that Kal-El is praised as Earth’s hero, but is that really enough to tip him over into full-blown Machiavellianism? Oh well, sometimes evil just be evil.

After fully destroying the trust that the world has in Superboy, Dev-Em releases Superboy from the Phantom Zone and departs Earth. After an unsuccessful attempt by Superboy to explain about Dev-Em to a world that hates and distrusts him, the police chief makes some fake red kryptonite to explain Superboy’s actions, which everyone naturally forgives. (Why this explanation is more believable or more acceptable than an evil lookalike, I’m really not sure)