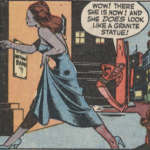 In December 1945, Police Comics #51 introduced a recurring villain of Plastic Man: The Granite Lady. An irresistible woman, but a mediocre singer, she was injected with a serum that turned her into a living granite statue. Plastic Man restored her to normalcy in this first story, of course. 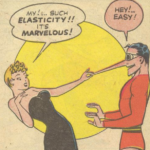 There are obvious lewd and bawdy places a character like Plastic Man could go, but this was the raciest panel I’ve seen so far from Police Comics #28 (January 1944). Why are his hands like that? Why are her hips like that?

In May 1941, Police Comics #1 by Quality was launched, featuring several new heroes that would eventually find their way into DC canon. The first, and by far most popular, was Plastic Man, created by Jack Cole. A petty crook who accidentally swallowed some acid that caused his body to stretch to any shape he […] 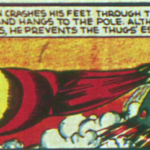 Timely Comics (the company that became Marvel Comics) debuted a new comic book in January 1940, Mystic Comics, with the improbably-named character of Flexo the Rubber Robot (or Flexo the Rubber Man). That’s right, this was a robot that could stretch, which makes Flexo the first superhero with that power! It’s hard to believe I’ve […] 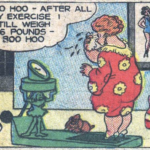 In September 1937, Quality Comics debuted with Feature Funnies #1.  It mostly reprinted of strips that had already been published by other companies like Joe Palooka and Jane Arden.  It also featured Lala Palooza by Rube Goldberg, who became famous for “Rube Goldberg Machines“. Before it was a famous alternative music festival, Lollapalooza was a […]