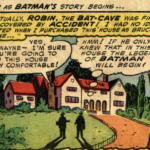 In Detective Comics #205 (Jan 1954), the Bat-Cave is given a revised origin in which Bruce Wayne discovers the cave only after purchasing his house. This is a pretty significant ret-con, given that most Batman origins depict that Bruce inherited the stately Wayne manor from his parents.