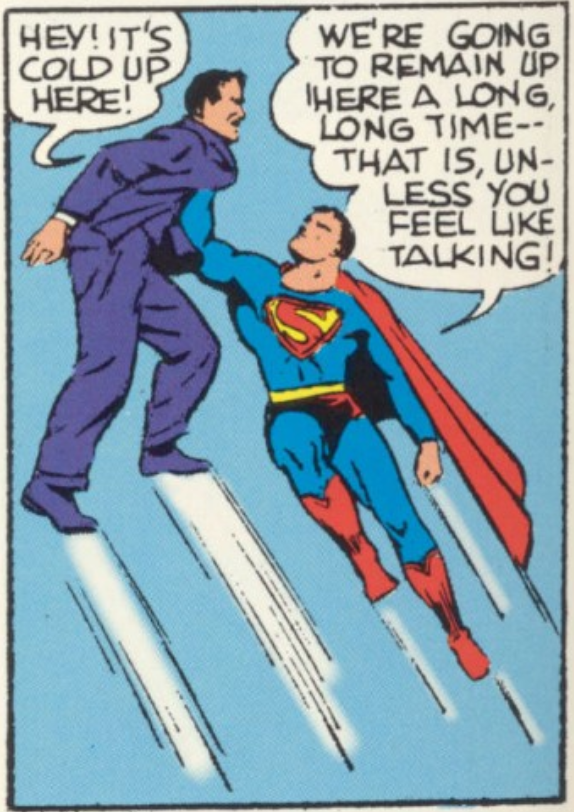 In Superman #11 (May 1941), it seems that Superman finally has the ability to defy gravity and truly fly. Brian Cronin debunks the myth that the Fleischer Superman cartoons were the first place Superman deliberately flew and he believes that Superman actually first flew in the comics in Superman #10 (March 1941). However, while inspecting that issue, I mostly saw a lot of leaping, swooping and plummeting. There is even one scene in Superman #10 where he hides in the ceiling of a room above a criminal by gripping onto a door frame. If he actually had the ability to defy gravity, he would just float there. I will concede that Superman has conversations with a voice in the sky and this is hard to do unless he can defy gravity, but it’s not made 100% clear.

Meanwhile, in Superman #11 although he does do some leaping and gripping of window sills, we see several panels and story elements that clearly indicates his ability to fly and defy gravity. In one story in that issue he threatens to suspend a criminal far up in the sky indefinitely (pictured above). In another story, Superman switches in mid-air to race a bomb falling towards a building. And in yet-another story, they clearly indicate his ability to change direction at will while suspended in mid-air (note the spiraling air trails):