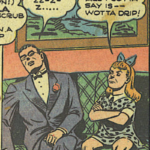 Ok, time for some more comic relief. Clark Kent discovers that Lois’ niece Susie needs to be looked after. He reads her the story of Cinderlla, falls asleep, then dreams he is Superman and needs to help Cinderella. The obnoxious Susie keeps Clark and Superman a little busy, throughout her appearances and gives Superman something […] 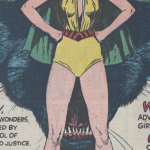 Frank Borth took over the art for the Phantom Lady stories in Police Comics #17 (January 1943). Apparently he was not satisfied with her already-scanty costume (basically a one-piece bathing suit and a cape) and removed the back and added a split to her navel. Despite there being more female costumed adventurers, most of them […]

In Batman #16 (February 1943), a third character is introduced to the “Batman Family”: Alfred the Butler. He was created by Don Cameron. Alfred starts out as an overweight aspiring criminologist who stumbles onto Bruce Wayne’s secret identity. Batman and Robin accept Alfred into their lives. Alfred is the beginning of what I will call […] 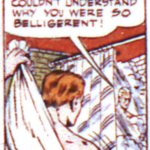 I don’t know if DC decided to give origin stories to some of their superhero partners or if this was a coincidence, but Green Arrow and Speedy are given an origin story in More Fun Comics #89 (January 1943): Roy Harper is orphaned and marooned on a mesa while Oliver Queen chases after an archaeologic […] 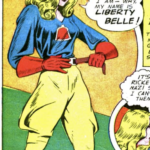 Woops – one more post before we leave 1942 behind for good! I thought it would be a good time to skip back a month and cover at least one superhero debut that I missed: Liberty Belle makes her debut hiding out in Boy Commandos #1. Liberty Belle was a World War II heroine who, […] 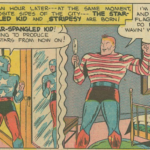 Well it’s 1943 – and the World War II rages on. In Star Spangled Comics #18 (January 1943), the Star-Spangled Kid and Stripesy are given an unlikely origin story: two strangers decide, at the same time, independently, to take up costumed adventuring, on the same case, and choose different parts of the flag as their […] 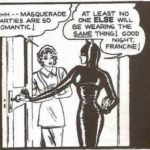 Miss Fury newspaper strip reprints were collected into a comic book by Timely Comics (the company that became known as Marvel Comics) in December 1942. At first black and white, full color stories started in Issue #2. The character was known as Black Fury in the context of the stories, and I imagine her skin-tight […] 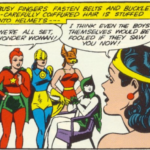 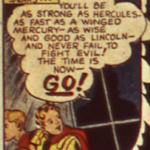 More “name-squatting” continues in the Golden Age – we see a character name “Marvel Boy” created by Timely Comics during the hey-day of Fawcett Comics’ Captain Marvel craze. This is actually the second story featuring this version of Marvel Boy, Martin Burns. As Wikipedia points out, both stories were pretty different and the character never […] 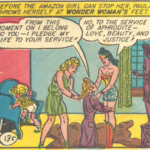 In December 1942, Wonder Woman #3 features the first time a recurring villain character goes through a reform and becomes an ally of a superhero. Baroness Paula von Gunther is revealed to have become a villain after Nazis kidnapped her child. Having restored her child, Wonder Woman sets out to reform her. And she stays […]