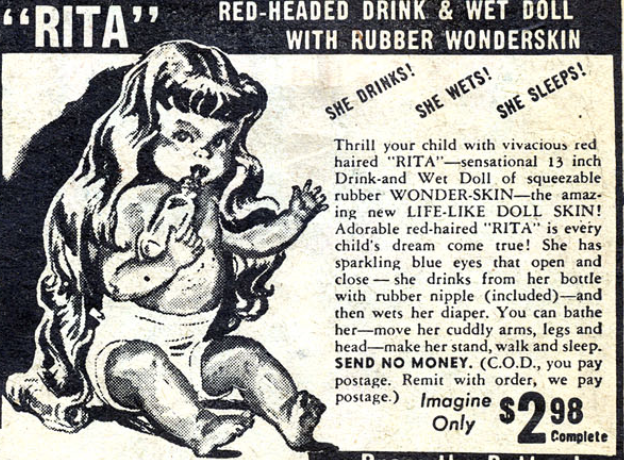 March 1949 ends another Timely (Marvel) superhero solo book with Captain America #73 (March 1949). With its next issue, it becomes “Captain America’s Weird Tales”, a horror comic, which maybe was fore-shadowed by the truly macabre ads for toys in this issue. Pictured above is Rita, a babygirl doll with long vivacious red hair that drinks, wets her diaper, has “squeezable rubber wonder-skin” and beckons at you with her eyes as if to say “How shall I kill you tonight?”

Accompanying the ad for Rita is another probably unintentionally spooky ad for “Buddy Bear”:

The drawings are bad enough, but who thought it made sense to make a toy bear with “flashing electric eyes”?

Seriously these toys are like ten times scarier than the twisted versions of toys that were tortured by “Sid” in Toy Story.