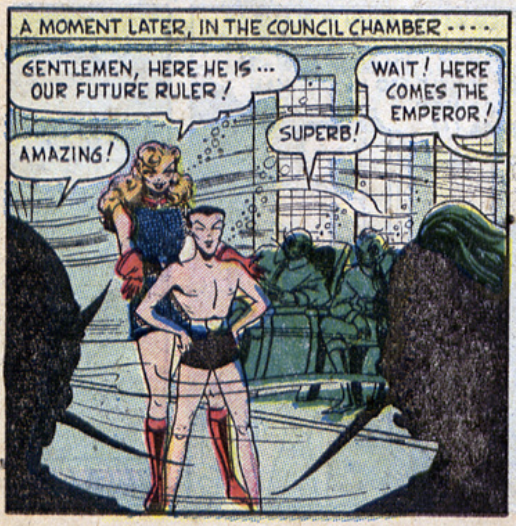 The final issue of Sub-Mariner Comics #23 also came out in March 1949. Like the Human Torch’s last issue, it features an origin story for the Sub-Mariner that goes much deeper into Namor’s birth, early life, than has ever been seen before. I don’t know if this was just a backup story they had lying around or a last-ditch attempt to see if stories about a teenage Namor would strike a chord with readers. Oddly, the caption at the end of the last story reads:

What further evil deeds of revenge will the Sub-Mariner dream up? Watch for his spiteful return in the next issue of Sub-Mariner Comics

Anyway, this pretty much signals the end of superheroes at Timely (Marvel) for some time. I believe there is a brief attempt at a revival in the mid-1950s that didn’t go anywhere, so we have about ten years of comic book history until we see the true rise of the Marvel age of comics in the 1960s…