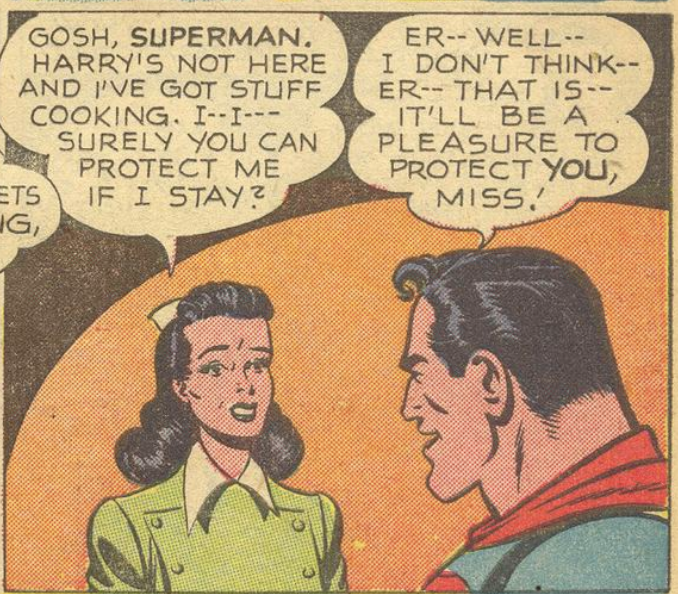 In World’s Finest #47 (June 1950), the Superman story “The Girl Who Hated Reporters”, we get more inconsistency in how Lois met Superman/Clark Kent. In this story, Lois is working at a diner as a waitress and ostensibly hates reporters because that’s all she sees. She has seen and served Clark Kent, but her first chance to meet Superman is when the diner’s patrons are threatened by criminals. Thanks to Superman’s intervention, Lois is inspired to become a reporter and gets her first scoop.

Twelve years ago in Action Comics #1, when Superman first debuted, it was pretty clear that Lois Lane was an established reporter (for the Daily Star) and that she met Superman while being deliberately putting herself in the line of danger.

Compare the body lines, the facial expressions, the lighting and shadows, and the dialog between the two panels. One evokes action, dynamism, speechlessness, and has a cinematic quality. The other is a bland, wooden headshot of a bored waitress and a stammering, shy boy scout. Which versions of both characters do you prefer? Joe Shuster or Al Plastino doing Wayne Boring’s style?

P.S. This story also completely ignores the recent ret-con of only two years ago when Superboy met Lois Lane as a girl!