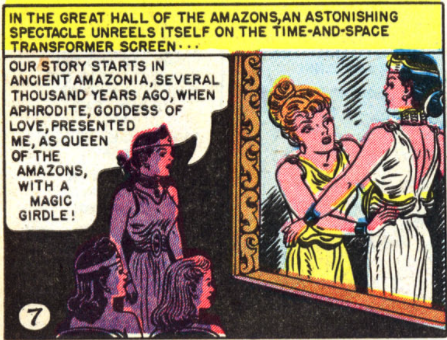 Wonder Woman #45 (November 1950), includes a re-telling of Wonder Woman’s origin. It describes in detail how Aphrodite awarded Queen Hippolyte a magic girdle, and how Hercules tricked her into giving up the girdle, rendering the Amazons helpless against Hercules’ army.

Hippolyte makes a plea to Aphrodite, who agrees to help the Amazons this one time, but going forward they must wear arm bands/bracelets to remind themselves they must never submit to bondage again nor allow a man to set foot on Paradise Island. Later, during World War 2, Steve Trevor crashes and is rescued by Diana.

Diana realizes it is her duty to leave Paradise Island, where she is ageless, and fight in the outside world for justice. She wins the contest of champions, to the surprise of her mother, and becomes Wonder Woman.

The 2017 feature film Wonder Woman largely kept this plot, though it changed the war to World War 1 to distinguish itself from Captain America, I imagine. I wonder if the original script kept the Amazonian contest of champions.

Over the last year, I have noticed the cover art for Wonder Woman has distinctly changed, bringing a more modern, less cartoon-y version of her face – I imagine to attract more readers. However, the interior art has, so far, kept the traditional style.